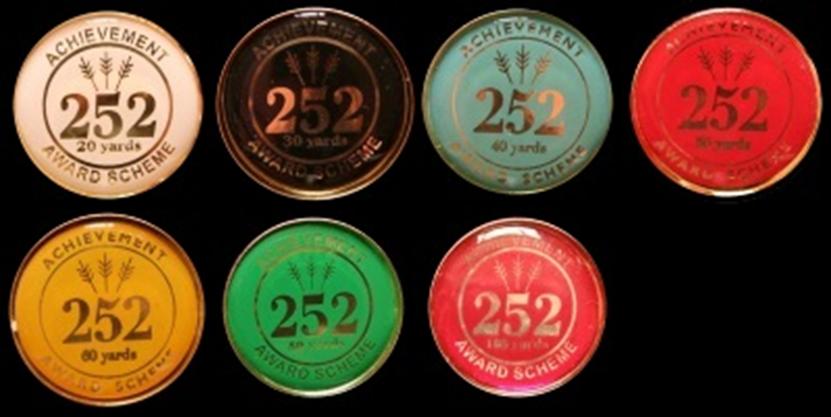 For the 2017 outdoor season we are introducing the “252” scheme which has been adopted by many other clubs. Some clubs use the 252 scheme to keep archers from shooting long distances until they’ve reached a good score on the shorter distances. We won’t—you can shoot any distance you like.

The number 252 relates to shooting an average arrow value of 7 (a “red”) over your first three dozen arrows, at a single distance. There is no specific “252” round, you can use your score on the first three dozen of any National, Western, Windsor or Bristol round. For recurve archers the eligible score is always 252, for other bow styles the scores are adapted (see the table). The badges will still show “252” though…

You can claim a 252 badge once you’ve submitted one qualifying score for the distance you’re claiming for—just fill out a claim form and put it in the tray with completed score sheets. Badges are awarded on a loan-and-trade-in basis, i.e. if you claim a higher distance badge you have to give your lower distance badge back.

One more pin to bling out your quiver!