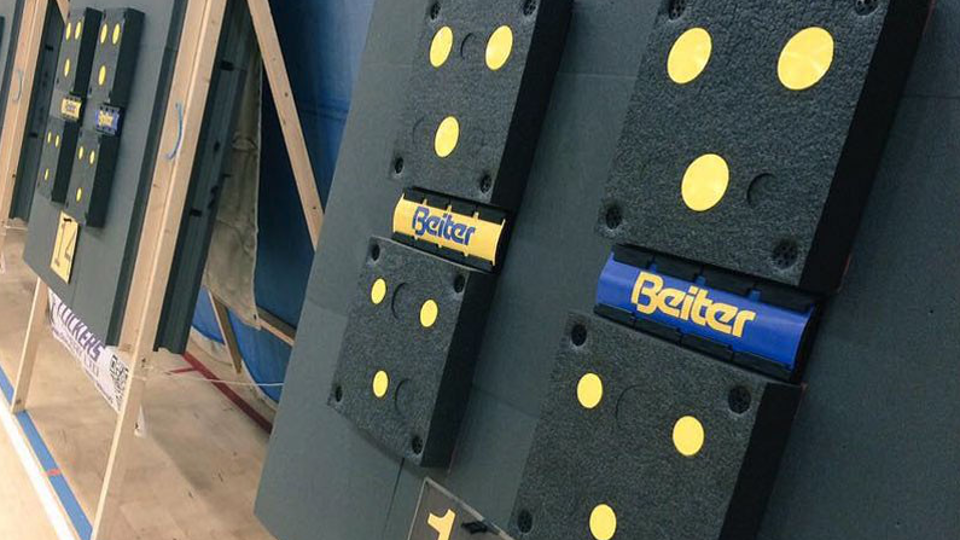 Last Sunday (March 5th) Nel and I (team “Double Dutch” for the occasion) participated in the Beiter Hit-or-Miss express tournament organised by Hingham Bowmen (Hingham lies about 15 miles west of Norwich). As a warm-up we first both shot a Worcester round (241 resp. 299, so we won’t talk about that), but the real reason for coming started afterwards.

In a Hit-or-Miss competition teams of one recurve plus one compound archer shoot against other duos in head-to-head format. The targets are just three yellow spots on a black background—60mm for recurves (Portsmouth “10”) and 40mm for compounds (WA18m “recurve 10”). A team has to shoot all their 6 arrows within two-and-a-half minutes, so there is a time pressure. You can’t see the clock when you’re shooting, so have to rely on your team-mate to keep an eye on the timer. Nel shoots pretty fast, so I had plenty of time.

Unlike normal shoots teams supporting and heckling one another is encouraged, so it’s all but quiet. Loudest was team “Norfolk ‘n chance!”, consisting of judges Sean Fox and Kieran Carr. It didn’t translate to hits though…

As with our Christmas bauble shoot, after each end of head-to-head the winner moves left and the loser moves right. Out of 14 teams we started as 4th seed, and over 18 head-to-head rounds we moved up to target 1, then trickled right to 5, and back left to target 1 again where we lost our last match against the eventual winners, giving us 3rd place overall. A rewarding result.